The game is played as singles, doubles or triples. In singles or doubles each player has three boules and in triples two. 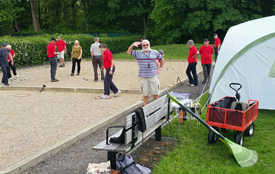