Mirfield vs Wetherby at MPC

A dry start to the day and Mirfield suffered two players down in Ruth and Christine W.
So Christine Campey kindly stepped in to fill one place, whilst I reluctantly, filled the other.

The triples commenced with Harry, Shirley and Tony H playing together. We took an early lead and got to 8 or 9 nil before the opposition hit back and began their challenge. However we held them off and managed to give MPC its first triples win of the season with a 13-4 win.

Jim, Christine C and Dave K were our other triples team. They started off well, leading the opposition convincingly. But it was eventually 11 all and anyone's game. Unfortunately for us it went in Wetherby's favour. So close.

Jim and Christine C had a stormer of a game against strong opposition in the firm of the Wetherby Captain and Chairman Alan and Alec. A convincing 13-1 win. Well done team.

Harry and Shirley started off poorly going behind 0-4 before picking up a few points themselves. It was a strange game in that H & S scored a 3 at one end but didn't put the score on the board. However, Harry always keeps score on his personal scorer and when they scored another 3 at the next end, Harry realised the error and fortunately the opposition agreed that Harry was correct. This put us back in the game. In another incident, their player attempted a shot, but missed and his boule hit the backboard. Harry removed the boule and placed it in the corner well out of the way. We were on coche to take points when the guy declared he had a boule left and went to pick up the dead boule from the corner. Harry had to explain to their team that it was a dead boule following a failed shot. Luckily they remembered and accepted the explanation.
However, despite trying, we didn't get the breaks at the end and went out losing 10-13.
Our third pair was Dave K and Tony H who, to be fair were up against another strong Wetherby pair. A valiant effort, but the boules didn't run in our favour and we lost this one 5-13.
So two wins out of five was our best result to date.
We are propping up the league, but we have had some encouraging games and many could have gone either way. In fact, even though we lost against Wetherby 2 games to 3, we actually beat them in points scored as we made 52 to their 44. So it's not as bad as it looks.

Keep it up team Mirfield. 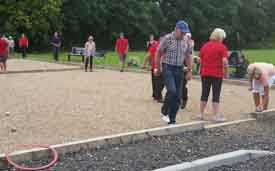