An overcast day, but fortunately dry to start with.

Twenty five members turned out to play Pétanque, but four dropped out at various stages of the match.

Round one saw Jim and Shirley win convincingly with a 13-2 score giving them a +11 start, alas this was beaten by Kevin and Ron with a 13-1 score making them one point ahead.

Round two, and Jim races ahead with a 13-7 win and puts him on a cumulative +17 score. He was followed by Ron on +14 and Lucy, Kevin and Tony H on +13. So 7 players go into the third round with two wins and a chance of being this month's champion. Who will it be?

Round three and darker clouds gathered and it began to feel a bit colder.

There were only three players who managed to get three wins today.

Robin, who had been quietly pocketing two wins, went on to win again to give him a +8 for third place.
Jen was even stealthier and obtained her third win to give her a +13 for second place. Well done Jen.
But first place was won by Kevin, who by chance was partnered by moi playing with Anne's boules, so pointing for me was par excellence. Kevin and Harry quickly dispatched Tony H and Irene 13-1 to give Kevin his third win and a +25 points.

Fortunately, our quick game avoided the rain shower that unfortunately affected the few remaining players who soldiered on in true MPC style.

There were no fanny scores... Boo!

So well done everyone and particularly Kevin. No photos were taken of the presentation as Kevin left before we all got into the pavilion for a welcome cup of hot tea/coffee and cake. 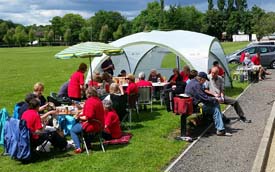