hese constitution amendments were agreed at a Special General Meeting of the Mirfield Petanque Club.

The aims of Mirfield Petanque Club will be:

Membership is open to anyone who:

Membership will begin as soon as the member's communication details are known and the first annual subscription has been received, payable in advance. Part of the annual subscription will be used to cover social membership of Mirfield Cricket Club. This allows us to use the club room and facilities. The remainder will be the fee to join Mirfield Petanque Club.

The amount of the annual membership fee will be agreed at the Annual General Meeting (AGM) and will be payable by all members prior to 31st May each year.

A list of all members will be kept by the secretary. The Mirfield Cricket Club will also have a list of members of Mirfield Petanque Club for their club records.

Future membership applications may be suspended if the member numbers reach a point where the facilities provided become overcrowded.

Ceasing to be a member:

Members may resign at any time in writing to the secretary. No fees will be refunded.

Any member who has not paid their membership fee by 1st August will be contacted by the committee, who will then decide whether that member is deemed to have resigned.

Any offensive behaviour, including racist, sexist or inflammatory remarks, will not be permitted. Anyone behaving in an offensive way or breaking the equity policy may be asked not to attend further meetings or to resign from the club if an apology is not given or the behaviour is repeated. The individual concerned shall have the right to be heard by the management committee, accompanied by a friend, before a final decision is made.

Mirfield Petanque Club will not discriminate on the grounds of gender, race, colour, ethnic or national origin, sexuality, disability, religious or political belief, marital status or age. We have an Equal Opportunities Policy covering this.

The business of the club will be carried out by a Committee elected at the Annual General Meeting. The Committee will meet as necessary and not less than four times a year.

Other committee members will be:

In the event of an officer standing down during the year a replacement will be elected by the next General Meeting of members.

Any committee member not attending a meeting without apology for three months will be contacted by the committee and asked if they wish to resign.

The Committee meetings will be open to any member of Mirfield Petanque Club wishing to attend, who may speak, but not vote.

An Annual General Meeting (AGM) will be held in April.

All members will be notified at least 2 weeks before the date of the meeting, giving the venue, date and time.

Nominations for the committee may be made in writing to the Secretary before the meeting, or at the meeting.

The quorum for the AGM will be 20% of the membership. All paid up members have the right to vote.

The Secretary will call a Special General Meeting at the request of the majority of the committee or at least eight other members giving a written request to the Chair or Secretary stating the reason for their request.

The meeting will take place within twenty-one days of the request.

All members will be given two week's notice of such a meeting, giving the venue, date, time and agenda, and notice may be by telephone, email and notice board poster.

The quorum for the Special General Meeting will be 20% of the membership.

General Meetings are open to all members and will be held at least once every 3 months or more often if necessary.

All members will be given two weeks notice of such a meeting, giving the venue, date, time and agenda, and notice may be by telephone, e-mail and notice board poster.

7. Rules of Procedure for meetings

Meetings will be held and will follow the items on the agenda, plus any other business.

All questions that arise at any meeting will be discussed openly and the meeting will seek to find general agreement that everyone present can agree.

If a consensus cannot be reached a vote will be taken and a decision will be made by a simple majority of members present. If the number of votes cast on each side are equal, the chair of the meeting shall have an additional casting vote.

An account will be maintained on behalf of the Club at a bank agreed by the committee. Three cheque/withdrawal signatories will be the Chairman, the Secretary and the Treasurer. Any two of these must sign any request for withdrawal. The signatories must not be related nor members of the same household.

Records of income and expenditure will be maintained by the Treasurer and a financial statement given to each meeting. The financial year end will be 31st March.

An audited statement of accounts will be presented by the Treasurer at the AGM.

All money raised by or on behalf of Mirfield Petanque Club is only to be used to further the aims of the group, as specified in item 2 of this constitution.

The finances of the Club will be the responsibility of the Committee.

Mirfield Petanque Club will hold Public Liability Insurance (to an indemnity value sufficient to cover any reasonable claim), through their membership with Mirfield Cricket Club or directly with other insurers.

A copy of the insurance certificate and policy details will be held by the club secretary.

9. Amendments to the Constitution

Any proposal to amend the constitution must be given to the Secretary in writing. The proposal must then be circulated with the notice of meeting.

Any proposal to amend the constitution will require a two thirds majority of those present and entitled to vote.

The Constitution and any amendments will be notified to all members and posted on our website for future reference.

The specific functions related to the Club, give authority to the committee to raise funds by providing activities to further the Club's aims and objectives. This Powers clause outlines the Club's authority to:

Raise funds; the club will raise funds by several means:

The committee do not have any authority to purchase equipment or do anything which puts the financial status of the club in jeopardy. Nothing should be spent without the authority of the committee, who should ensure that sufficient funds are available.

If a meeting, by simple majority, decides that it is necessary to close down the club it may call a Special General Meeting to do so. The sole business of this meeting will be to dissolve the club.

If it is agreed to dissolve the club, all remaining money and other assets, once outstanding debts have been paid, will be donated to a local charitable organisation. The organisation to be agreed at the meeting which agrees the dissolution. 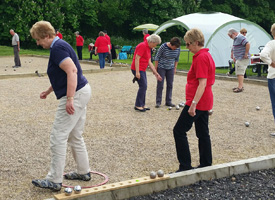